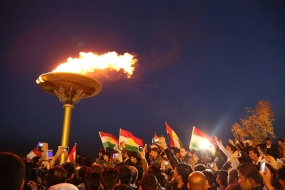 The people living in the Kurdistan Region are Kurds as well as Assyrians, Chaldeans, Turkmen, Armenians and Arabs. The Region has a young and growing population, with 36% aged 0-14 years, and only 4% aged over 63. The median age in Kurdistan is just over 20, meaning more than 50% are less than 20.[1] Traditionally, the majority of people in the Kurdistan Region lived in villages and survived on farming and animal husbandry of mainly sheep and goats thanks to the land’s fertile soil. The Region was known as the breadbasket of Iraq. Today this has reversed, with the majority living and working in the three cities of Erbil, Duhok and Slemani and working in the government, construction, and trade. Dance Kurdish dance is a group of traditional hand-holding dances similar to those from the Balkans, Lebanon, and to Iraq. It is a form of round dancing, with a single or a couple of figure dancers often added to the geometrical centre of dancing circle. According to the Encyclopedia of Islam, Kurds sing and dance in all of their festivals, birthdays and marriage ceremonies. These folkloric dances are one of the main factors in distinguishing Kurds from neighbouring Muslim populations. Kurdish dance has various and numerous versions such as following: Dilan Sepe Geryan Chapi 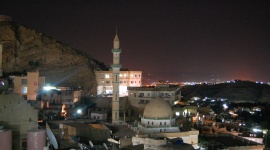