In Duhok province at Silav resort, open-air restaurants provide a view looking up to the nearby ancient town of Amedi (Amadiya), which sits atop a two-kilometre wide plateau. Muslims and Christians have lived alongside each other for centuries in this small town. In former times, it was also home to a thriving Jewish community. Amadiya offers a wonderful view of the nearby valleys and gorges. The best time to visit Kurdistan is March when people celebrate Nawroz, the New Year marked by the spring equinox, by having picnics and dancing in the hills and valleys.

The people living in the Kurdistan Region are Kurds as well as Assyrians, Chaldeans, Turkmen, Armenians and Arabs. The Region has a young and growing population, with 36% aged 0-14 years, and only 4% aged over 63. The median age in Kurdistan is just over 20, meaning more than 50% are less than 20.[1] Traditionally, the majority of people in the Kurdistan Region lived in villages and survived on farming and animal husbandry of mainly sheep and goats thanks to the land’s fertile soil. The Region was known as the breadbasket of Iraq.

beginning of the 19th century, a great attention was given to researches and the studies of cities, specially the European universe because the development of civilization of any nation or community. Dohuk locates in the western north of Iraq, it is (470)km far away from the capital (Baghdad). Dohuk locates in the east of Grinech line and the south of the tropical line. It is (585)m. over the sea level. Dohuk location is an important and strategically location regarding the historical and geographical sides.

Duhok governorate lies in the far north-west of Iraq and forms the western governorate in Iraqi Kurdistan Region. It has a strategic location since it is considered to be a point of joint among three parts of Kurdistan (Syria- Turkey- Iraq). 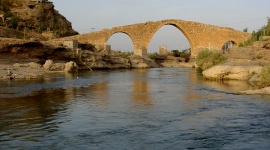